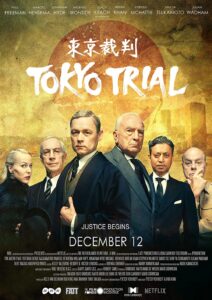 The 2016 TV Series “Tokyo Trial” tells the story of the International Military Tribunal for the Far East, also known as the Tokyo War Crimes Tribunal, which trialed the military leaders of Japan following the end of World War II. While these proceedings were (and still are) far less prominent than the ones in Nuremberg, they were, nevertheless, of great historic significance.

Directed by Pieter Verhoeff and Rob W. King, the 4-episode series features a very capable cast, starring Marcel Hensema, Jonathan Hyde, Paul Freeman, Stephen McHattie, Julian Wadham, Irrfan Khan, and Michael Ironside. Right off the bat I have to say that the casting of Michael Ironside as General McArthur was a mistake, an opinion shared by others too. It’s probably no fault of his own. Sometimes a character is just not for you, and I had a very hard time finding him believable.

That being said, I will struggle to find too many other faults with this series (if any). The structure is simple and works well, we are quickly presented with the judges, getting familiar with the circumstances and the ground rules, and then it’s off to the clash of ideas, the trials and the deliberations. It could be classified as a bit of a slow burner, with plenty of focus on certain details, but there’s enough drama and intellectual challenge, especially during the deliberations in the chambers, to keep you glued to the screen. There are shades of “12 Angry Men” here, which is quite the compliment.

Maybe the most remarkable thing about this series is that it doesn’t avoid the hard questions. In fact, challenging the viewer to contemplate those hard questions is the very meaning of this production, and that is something I always appreciate so much! It aims to make you think in nuances besides black and white or good against evil, and it succeeds gloriously at doing just that. This Series does not shy away from putting the blame on more than two shoulders when it is deserved, and to point out hypocrisy when it is the case. But in the end, it will be up to you to decide. What would you have done?

I was actually feeling like watching some cheap action flick or thriller when I found this, and despite not being in the mood for something serious, I found myself unable to get enough of it. Great acting and production values all around (as far as a novice like me can tell), and most importantly it’s historically accurate and significant too. There’s also historical footage, which is always a plus, so there’s not much missing here. I fully recommend this mini-series. It’s honest, factual, non-biased, interesting and challenging! Might be on Netflix in your country. Enjoy! 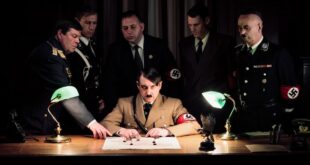 Imdb
User Rating: Be the first one !