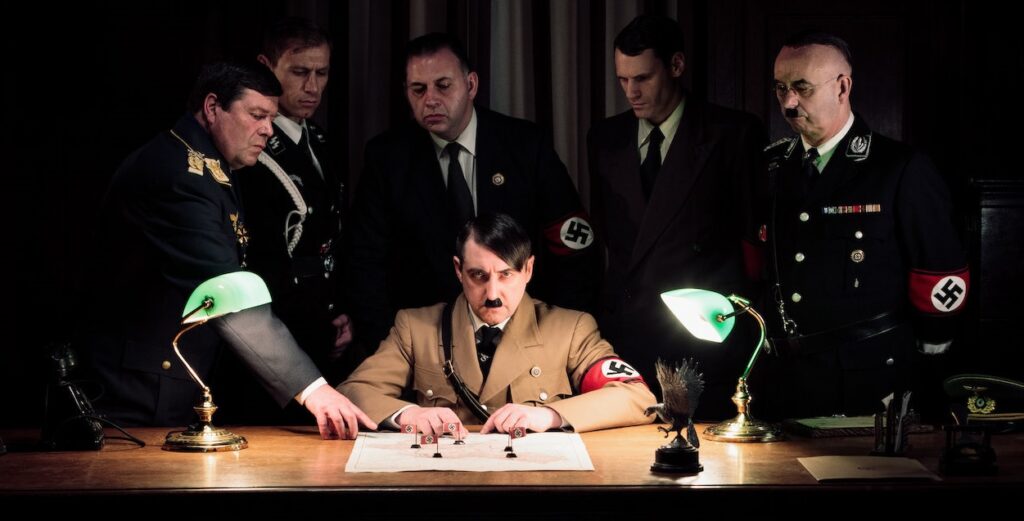 This 10 episode Docu-Series launched in 2018, on Netflix, tells the story of the leading Third Reich officials who were at Hitler’s side through the rise and fall of Germany before and during World War Two. It combines artistic re-enactment with archival footage and context offered by a few historians.

The series is certainly enjoyable and engaging, although it does get repetitive quite often, and could have been shorter. There is a fair share of valuable historical footage being shown, some of which is actually quite rare. But the good stuff ends here.

There are so many things wrong with this one, and so much to say, that it’s hard to know where to begin.

I’ll put it bluntly. The leaders of Nazi Germany are portrayed (by a dramatic, over the top narration) as a bunch of imbecile hooligans, a collection of pathetic teenagers competing in a reality show for the ultimate prize – Hitler’s attention. There is scheming and plotting, alliances and betrayal, everything you would want from a historical soap opera. Unfortunately, most of the claims made are baseless and pure speculation. The producers show us personal, unrecorded meetings behind close doors, or one’s own thoughts in the privacy of his home, and tell us what was going on as if they were there! They know for sure that most leading Third Reich officials had no political ideology and were only interested in scheming to get in Hitler’s good graces.

It seems like every time a Nazi official is mentioned, a demeaning adjective is attached to their name. They are losers, they are weak, they are fat, they are ugly, they are frustrated. They are insane, twisted, monstrous. They are pathetic sycophants (you’ll get tired of this word). And sometimes the producers are sinking quite low. I thought making fun of people’s physical disabilities is not something cool in our day and age – or when we do not like the person, it is fine?

The characters have no depth and are completely one dimensional – evil and idiocy incarnate. There’s no doubt: the producers wanted to make sure we understand that these people were the absolute scum of the earth in every aspect of their existence. I feel this is a disservice to humanity as a whole. The valuable lessons we can learn from World War Two are valuable precisely because all these people were human beings. We can learn and be better in the future by understanding their humanity, and going from there – if they were just fire spitting demons came from hell, what is there to learn?

I was expecting more from the historians which were featured in this series, but I was disappointed. Again, most of their expertise consisted in personal attacks, sarcasm, speculation, and tabloid drama – likely the direction imposed on them by the producers. I don’t need a historian telling me what Rudolf Hess’s level of affection towards Hitler must have been.

There’s more. For a Netflix production of solid cinematographic quality, the lack of attention to detail can be shocking. Most of the actors do not resemble their real life counterparts in any way, shape or form, not to mention the actors are changed mid series when the characters are supposed to have aged a few years. It makes no sense – a bit of makeup would have done the job. Adolf Hitler looks like somebody who would get beaten up as soon as he opened his mouth, as one IMDB reviewer accurately put it. He reminded me of Jojo Rabbit’s satirical Hitler, if you’ve seen that one (not that I recommend it). At no point did I feel anybody was believable. The uniforms are sometimes inaccurately portrayed, and resemble what you would find searching online for “cheap nazi Halloween costume”. Some dates and facts are also wrong – for example, the 1944 assassination attempt on Hitler is said to have taken place in 1942.

This series might as well be called “Let’s bash the Nazis”, because that’s what it is – not more, not less. They were bad, we get it, but this film seems to shove this notion down our throat like none before it, barring WW2 propaganda.

Ironically, I enjoyed it personally, but that was because I wasn’t counting on this to learn something, or get an accurate representation of what happened. I also took a bit of silly pleasure in picking apart all the claims thrown around without context or evidence.

But I would not recommend it. I actually feel it’s quite dangerous: it’s on Netflix, it had the advertising bucks, it is enjoyable, simple and easy to follow, it tells people what they want to hear and has all the fancy cinematography of a modern production – a perfect mix of qualities to engage the youngsters and novices, teaching them sensationalized, dumbed-down and out of context speculation claiming to be factual historical information. In fact, I feel it sways more towards historical fiction than the professional documentary it claims (but didn’t even try) to be.