Then and Now: Church in Foy, Bastogne, Battle of the Bulge 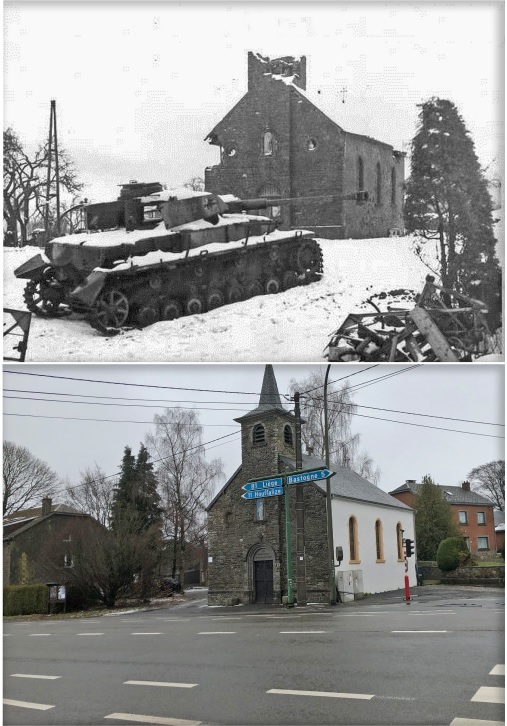 Church in Foy, Belgium, near Bastogne, pictured in January 1945 during the Battle of the Bulge, and in 2019. In the historical photograph we see a wrecked Panzer IV tank.

The village of Foy was made famous by the exceptional TV Mini Series “Band of Brothers”.

The Battle of the Bulge (16 December 1944 – 25 January 1945) was the final major offensive campaign by German forces on the Western front in WW2.

In the first week, the Germans besieged Bastogne and advanced almost 100 kilometers West to the village of Foy Notre Dame, near Dinant, before improved weather and reinforcements allowed the Allies to cripple German supply lines – pushing them back for one final time.

The importance of the battle, the vicious fighting and the brutal terrain have made the Battle of the Bulge one of the most famous clashes of WW2.

During the Battle of the Bulge, US forces suffered their highest casualties of any WW2 operation.

📖 The Longest Winter: The Battle of the Bulge and the Epic Story of World War II’s Most Decorated Platoon (Alex Kershaw , 2004)