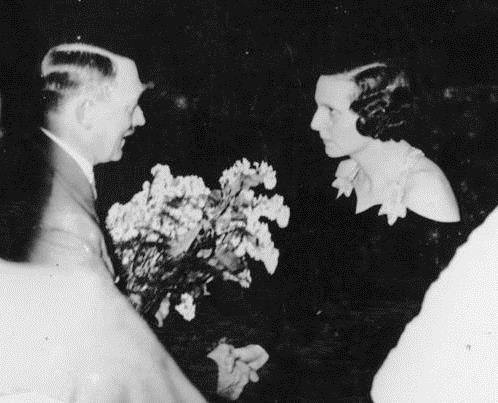 Adolf Hitler offering flowers to Leni Riefenstahl at the premiere of the famous propaganda film “Triumph of the Will” (Triumph des Willens). March 28th, 1935, at the Ufa Palace Theater, Berlin.

The film was a massive success and is still considered arguably the best propaganda movie ever made, a technological marvel for its time.

Director Leni Riefenstahl was also involved in other propaganda films of the time, and had a friendly relationship with Hitler. Her talents were widely acclaimed, but her reputation was destroyed after the war due to her involvement with the Nazi Party.

Between 1945 and 1948 she was imprisoned in various Allied camps, or held in house arrest, but was never convicted of war crimes. Riefenstahl won more than 50 libel cases against accusers who stated that she had previous knowledge of the Nazi Party’s activities, and was quoted as saying (about her regret meeting Hitler) “It was the biggest catastrophe of my life. Until the day I die people will keep saying, ‘Leni is a Nazi’, and I’ll keep saying, ‘But what did she do?'”.