King Michael I of Romania with Adolf Hitler in Berlin, 1940 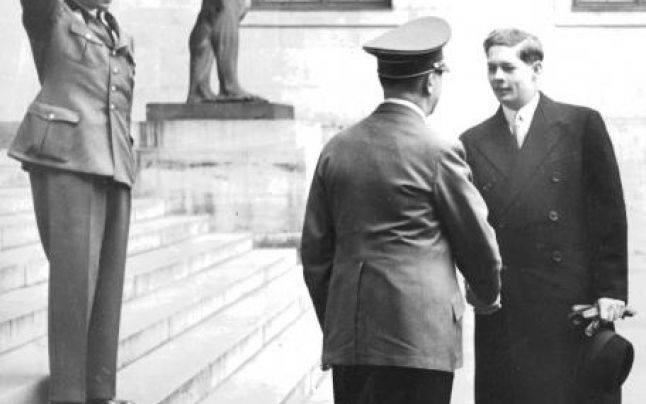 On August 23rd 1944, King Michael I of Romania (pictured here with Adolf Hitler at the New Reich Chancellery in Berlin, 1940) staged a coup to overthrow Romania’s head of state and Hitler supporter, Marshal Ion Antonescu.

With the tides of the war turning and with the Soviets already inside the borders, King Michael (aged 22) knew that leaving the Axis forces was imperative.

King Michael invited Antonescu at the Royal Palace in Bucharest and tried to convince him to sue for peace, but the Marshal refused, stating that “I gave my word to Hitler”. At that point, Michael spoke the password phrase “If that’s how things stand, there’s nothing left to do”. The Royal Guard entered the room and arrested Antonescu.

Despite King’s orders to be treated respectfully, Antonescu ended up in communist hands and was sent to the Soviet Union. He returned to Romania for trial in 1946. Before his execution on June 1st, he stated “Ungrateful people, not even my ashes will be left for you”.

King Michael’s coup on August 23rd 1944 is said to have shortened the war with as much as 6 months, and likely saved Romania from destruction.

But poor communication & strategy (official surrender treaty was only signed on September 12th) cost the lives or freedom of 130.000 Romanian soldiers, ordered to stand down while the Soviets were still fighting. Not to mention other atrocities against civilians.

Losing the Romanian position, army & oil was a big blow for Hitler. The Germans tried to maintain control, but after a few days they had to retreat West.

With the Western Allies trading away Romania to Stalin, the coup also set the stage for the communist rule of the country, which lasted until 1989. Michael has said that he will never forgive Churchill.

King Michael was forced to abdicate and sent into exile by communists in 1947. He returned after 1990, but was chased away until 1997 by the neo communists who took power.

He was the last living head of state from WW2 (Simeon II, Tsar of Bulgaria, still lives, but he was a minor during WW2 and the country was led via regency). He died on December 5th 2017, aged 96.