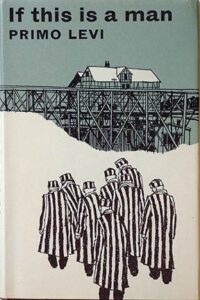 If This is a Man was the first book published by renowned Italian author and chemist Primo Levi after his liberation from the Auschwitz concentration camp. Finished in early 1947, the manuscript was eventually followed by two sequels, ‘The Truce’ (describing Levi’s journey back to his hometown Turin after the war) and ‘The Drowned and the Saved’, in which Levi circles back to his Auschwitz ordeal, providing a fascinating analytical approach into the psychology, motivations and behaviors of both victims and oppressors, and reflecting on how the experience shaped the lives of these people both during and after the horrifying events. To this day, the trilogy is considered a pillar of Holocaust literature.

In English editions (as well as in other languages), ‘If This Is a Man’ is often published alongside its sequel ‘The Truce’ as a two-volume set, basically covering Levi’s life from his capture until his return home, or as a standalone volume titled ‘Survival in Auschwitz’ – which this review is focused on.

To start things off I have to say that, despite me being the crowned neighborhood expert on World War II books, ‘If This Is a Man’ was actually a recommendation from a good friend, and I was definitely thankful for her suggestion, because this book has been quite special.

The story begins with Levi’s arrest in December 1943 and ends with his liberation in January 1945. It is a chronological (although the last chapter was actually written first) and descriptive testimony of Levi’s experience, which is rich in gripping reflections and introspections on the human mind, on human ethics, and on the entire ecosystem of the camp. All this makes the book not only a literary work, but a sociological and psychological study as well.

I was surprised to hear many critics (and even the author himself!) deeming Levi’s writing style as formal and basic, because to me it was anything but that. While Levi’s later works might have been more sophisticated, this book did not require such fanciness. I found the writing to be a great mix of concision and emotion. It is to the point, unpretentious, and reads as a testimony, but it is also heartfelt and memorable. The events and characters are remarkable and distinguishable, which allows your imagination to give them form with ease.

There is definitely literary value in this book, as well as objectivity. Levi is calm and balanced, not allowing himself to fall into the “Nazis bad, Allies good” banality, even though few would have blamed him if he did. Instead, he mostly judges based on individual merit and sees the grey areas. This has been intentional, though – Levi believed it would give his work more credibility, as per his own words. And it did.

‘If This Is a Man’ certainly has its place among the must-read World War II memoirs. It is raw and fresh, as the author started writing as soon as he returned home from captivity, and Levi’s literary talent gives it that heart and soul required to fully connect with the reader. Rating this as a 5 star book would not be a stretch by any means, and I am eager to read the sequels as well, particularly ‘The Drowned and the Saved’.