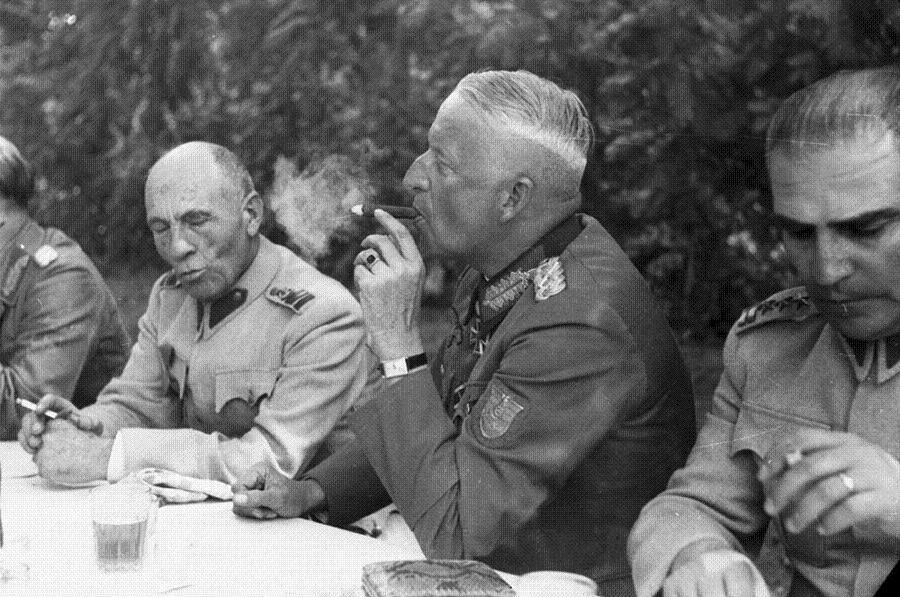 Erich von Manstein photographed while smoking a cigar alongside a few Turkish Generals on the Eastern Front, sometime during June 1943.

Although Turkey remained neutral until February 1945 (when it joined the allied cause), turkish generals traveled to the front in order to observe German military technology. Before joining the Allied war effort, Turkey had previously cut all ties with the Axis powers in August 1944.

Generalfeldmarschall Erich von Manstein (he was promoted to Field Marshal after the Kerch Peninsula battle in 1942), a WW1 veteran, was widely argued to be the top German commander during World War Two, as well as a military and strategic genius.

Von Manstein devised the ingenious and highly successful plan which was applied during the invasion of France (choosing to attack via the Ardennes, as opposed to doing it through Netherlands), and commanded a number of victorious campaigns on the Eastern front, including the Siege of Sevastopol (1941-1942), the Battle of the Kerch Peninsula (1941-1942), or the Third Battle of Kharkov (1943). He participated in a leading position in many other successful campaigns in the East, and he also had a role in the siege of Stalingrad.

In 1944 von Manstein fell out of favour with Adolf Hitler, and was not appointed to another post for the rest of the war.

During the Nuremberg trials von Manstein insisted the Wehrmacht was not to blame for the ethnic genocide carried on during the war, but was simply following orders and performing its sworn duty. He was convicted to 18 years in prison, served 4 of them, and went on to be an important figure in the rebuilding of Germany’s army during the ’50s.

Erich von Manstein died of a stroke on June 9th 1973, at the age of 85. He received full military honors at his funeral, but his reputation took a dive after his death, as certain reports tied him with some of the atrocities committed during the war.

📖 The Nuremberg Interviews: An American Psychiatrist’s Conversations with the Defendants and Witnesses (Leon Goldensohn, 2004)

“Lost Victories” in particular is considered to be an exceptional read on strategic thinking and military tactics.