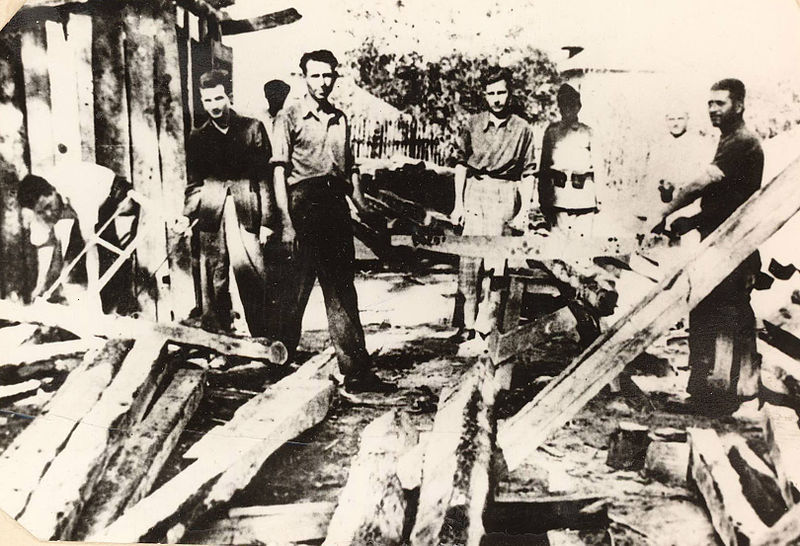 Nicolae Ceausescu (second from left, with jacket) pictured with other detainees in the Targu Jiu concentration camp, sometime in 1943.

A shoemaker, Ceausescu joined the Communist party in 1932, at only 14 years old, and gained a reputation as an agitator and a thug. Between 1936 and 1944, Ceausescu spent his time in various prisons and internment camps. Particularly at Targu Jiu, communist prisoners had many advantages due to bribes and influence, even being allowed to beat up fellow inmates who were not enthusiastic enough about the communist cause.

After the Western Allies abandoned Romania to Soviet influence in wake of World War 2, Communists overthrew King Michael I and seized power in 1947. Ceausescu worked as a Minister of Agriculture, Deputy Minister of the Armed Forces, and joined the Central Committee in 1952, becoming a full member of the Politburo in 1954. After the death of General Secretary Gheorghe Gheorghiu-Dej, he was elected as successor. His rule lasted until December 1989, when the Romanian Revolution overthrew the Communist Regime.

Ceausescu was quickly trialed and executed on December 25th, 1989, leaving behind a wounded country which is yet to fully recover from the misery of communist rule.

📖 The Life and Evil Times of Nicolae Ceausescu (John Sweeney, 1991)