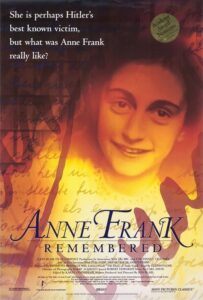 The tale of Anne Frank (whose diary sold more than 25 million copies!) is by now embedded in popular culture. There have been countless attempts at telling her story, some more successful than others, but this 1995 documentary by Jon Blair is quite possibly the best which has been made on the topic.

This cinematographic piece manages to put together rare personal and documentary footage to go with entries from Anne’s diary (read by Glenn Close) and testimonies by friends, family and fellow survivors. We even get the opportunity to hear Hanneli Goslar, the last survivor to see Anne Frank alive. Ms Goslar is still alive today (February 2021), aged 92. This mix really works, and the testimonies truly make this documentary stand out.

Overall, Anne Frank Remembered is a great homage both to Anne herself, as well as to all the other people who suffered unjustly during World War Two. As previously said, if you are interested in this particular story, this is probably the documentary you want to watch, even if may not have the same fancy image quality as newer works.