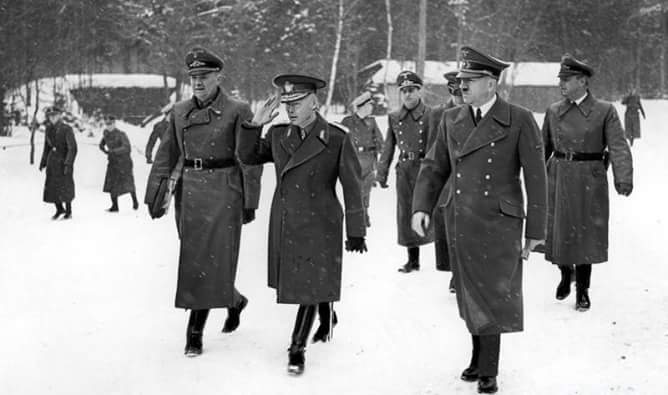 Adolf Hitler with Romanian Prime Minister, Marshal Ion Antonescu (center, saluting), at the Wolf’s Lair (Wolfsschanze) in February 1942. On the left of the image is Dr. Paul Schmidt, chief interpreter of the German Foreign Ministry.

During the meeting, Adolf Hitler assured Marshal Antonescu that he personally guarantees Hungary and Bulgaria will take no action against Romania after the war. The two leaders spoke about the unsatisfactory contribution of those two countries to the war effort, and about other economic issues. Hitler was very sympathetic to the Field Marshal’s grievances, mentioning German honor and his esteem for his Romanian Allies.

The Fuhrer had a lot of respect for Marshal Antonescu, and had even gifted him a luxury car in the previous year (1941) as gratitude for Romania’s dedicated involvement in the war. There are stories told by Romanian Army leaders of Ion Antonescu addressing Hitler bluntly and even confronting him on a number of occasions, with the Fuhrer often willing to appease.

Some historians stated that, in late 1942 / early 1943, Antonescu had said “Germany lost the War. Now we must focus not to lose ours”. While it is believable he thought that way given his military expertise, this quote has never been verified.

Marshal Antonescu, a fierce supporter and ally of Nazi Germany, was Romania’s leader for most of World War II. He was overthrown on August 23rd 1944 by King Michael, I as Soviet forces were knocking on Romania’s door. Antonescu was eventually executed on June 1st, 1946.