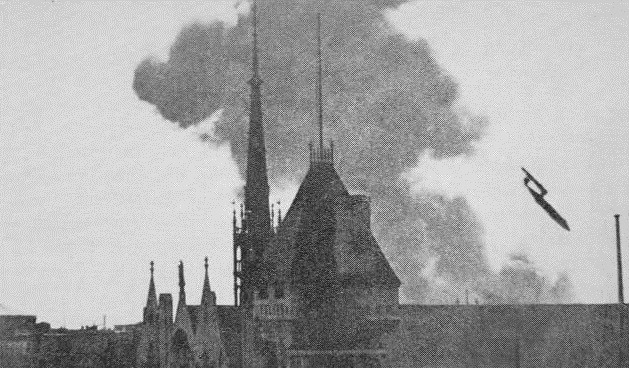 V1 flying bomb seen dropping on central London, with the Royal Courts of Justice in the foreground, sometime in the second part of 1944.

This particular German bomb is said to have caused significant damage, including the blasting of the Daily Herald office.

The V1 was a cruise missile deployed towards the end of the war together with the more advanced guided ballistic missile V2, as a “vengeance weapon” for the terror bombing of London after previous bombing of German cities by the Allies.

The miracle weapons did not have the desired effect despite being a technological marvel of their time. The costs were colossal, the aiming and detonation systems were not well calibrated, and false reporting by the Allies also tricked the Germans into aiming inaccurately.

Particularly the V2 rocket ended up laying the basics for the US and Soviet space programs. Many of the German engineers which had developed the V1 and V2 were hired to work for the above mentioned space programs.

📖 Target London: Under Attack from the V-Weapons During WWII (Christy Campbell, 2012)