USS Indianapolis survivors surrounded by sharks in the Pacific Ocean 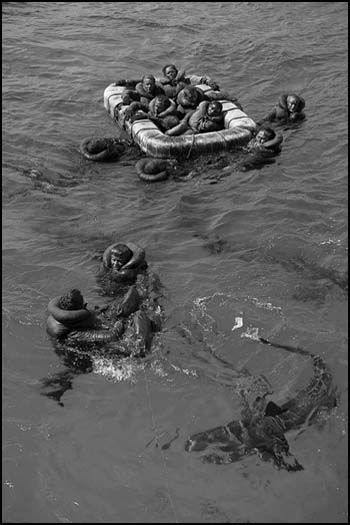 Sharks circling survivors of USS Indianapolis in the Pacific Ocean.

USS Indianapolis was sunk by Japanese torpedoes from the I-58 submarine on July 30th, 1945, after delivering parts of the atomic bomb which was eventually dropped on Hiroshima.

“We were losing three or four men each night and day. You were constantly in fear because you’d see the sharks all the time. Every few minutes you’d see their fins – a dozen to two dozen fins in the water”.

“They would come up and bump you. I was bumped a few times – you never know when they are going to attack you”.

“In that clear water you could see the sharks circling. Then every now and then, like lightning, one would come straight up and take a sailor and take him straight down. One came up and took the sailor next to me. It was just somebody screaming, yelling or getting bit”.

Captain Charles B. McVay III was court martialed and found guilty of “hazarding the ship by failing to zigzag”. However, there was clear evidence that the Navy itself put the ship in harm’s way and acted irresponsibly – thus, many interpreted the court martial of the Captain as a sham, a cover-up and an attempt to shift the blame. McVay committed suicide in 1968 and was posthumously exonerated in 2000.

📖 Indianapolis: The True Story of the Worst Sea Disaster in U.S. Naval History and the Fifty-Year Fight to Exonerate an Innocent Man (Lynn Vincent, Sara Vladic, 2018)

📖 In Harm’s Way: The Sinking of the USS Indianapolis and the Extraordinary Story of Its Survivors (Doug Stanton, 2001)