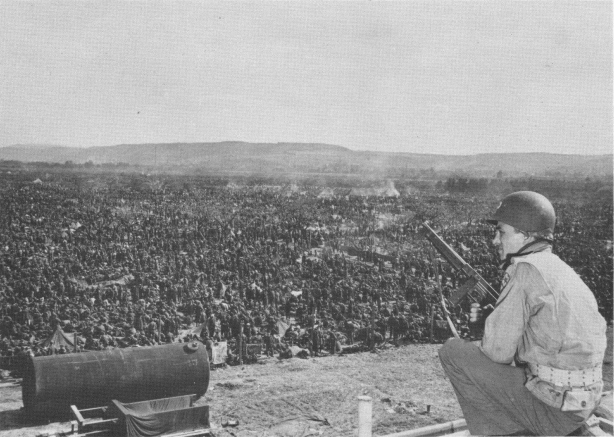 Us soldier standing guard over thousands of German prisoners in 1945 at Camp Remagen, part of the Rheinwiesenlager.

The Rheinwiesenlager were 19 camps in Allied occupied Germany before the end of WW2, which held over one million surrendered Wehrmacht soldiers.

Us Army Chief of Staff, General Dwight D. Eisenhower, made the decision to designate the prisoners as “disarmed enemy forces” instead of “prisoners of war”. This allowed the US to not worry about the treatment of the prisoners, and ignore the rights which the Geneva Convention would have given them as prisoners of war.

Supposedly the decision was made because such a large number of prisoners could not be accommodated by the US forces in a humane manner, especially as the British refused to take any more of them as the war was approaching an end. But in fact Eisenhower had made this decision in March 1943.

Around 5-6000 Germans are estimated to have perished in the Rheinwiesenlager camps, mostly due to starvation, dehydration or exposure to weather, as there were no shelters built.

📖 Other Losses: An Investigation Into the Mass Deaths of German Prisoners at the Hands of the French and Americans After World War II (James Bacque, 1989).

While many historians, particularly Eisenhower’s biographer Stephen Ambrose, have criticized aspects of Bacque’s book (especially the death numbers), most agreed that the basic truth of the book can’t be argued.