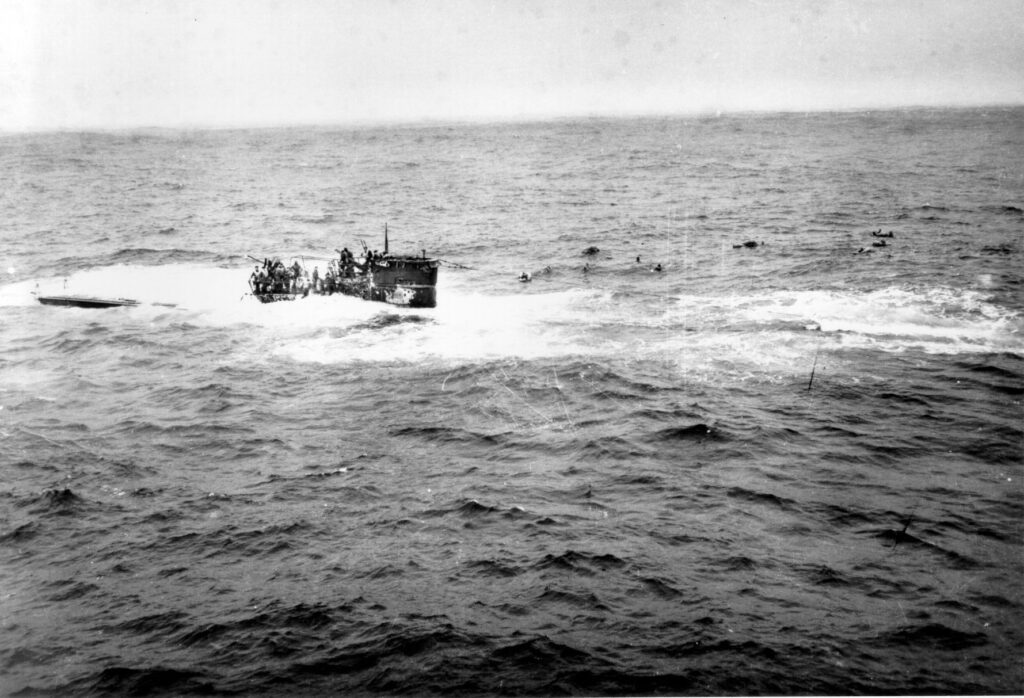 The German submarine torpedoed and sunk the massive Pan Pennsylvania tanker, which was trailing behind its convoy south of Nantucket Island.

Expecting a counterattack from the US convoy CU 21, captain Klaus Hanert decided, in a bold move, to hide the submarine below the sinking Pan Pennsylvania ship.

U-550 was eventually detected by sonar, was depth charged by USS Joyce and forced to surface.

U-550’s engineering officer later stated: “We waited, and when we couldn’t hear anything, we thought the escort vessels were gone. But as soon as we started to move, BANG!”.

Once surfaced, U-550 was encircled, rammed and fired at by USS Joyce, USS Peterson and USS Gandy.

Robert Wilcox, captain of USS Joyce, correctly interpreted a white flare from U-550 as a signal of distress and surrender, and ordered a cease of fire.

The U-Boat crew climbed up to the deck, and around 40 of them jumped or fell into the 7 degree Celsius water (as seen in the image).

13 crewmembers were rescued by USS Joyce, including Captain Klaus Hanert.

The men in the water tried to reach USS Peterson, but were not picked up. A few of the bodies were discovered later, and one of the crewmen was found to have survived for two weeks in the freezing water before perishing.

The above book was written after U-550’s wreck was discovered in 2012. It’s main focus is on the search for the wreck, and on the surviving crew members from both sides.