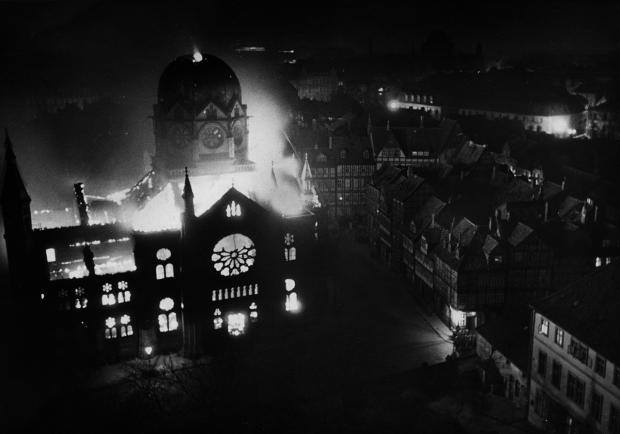 During Kristallnacht, Jewish goods, properties and synagogues were attacked and destroyed, while tens of thousands of Jewish people were arrested and / or deported.

Kristallnacht (9-10th November 1938) emerged as a response to the assassination of German diplomat Ernst vom Rath by Polish Jewish teenager Herschel Grynszpan. The pogrom was carried out by both The Nazi party paramilitary and civilians, while authorities did not publicly encourage the events but did not intervene either.

An interesting, lesser known fact is that Hitler (considered by most to be the architect of Kristallnacht) appears to not have known about it, or he only reluctantly agreed to the pogrom at the insistence of Goebbels.

According to Rochus Misch in his book “Hitler’s Last Witness”, Karl Krause (Hitler’s valet at the time) said the Fuhrer was beside himself with rage hearing about the events, shouting “What have you set in motion again!?”, referring to the news of the events and that Goebbels approved them.

According to historian Ian Kershaw in his book “Hitler 1936-1945”, Hitler held back to the idea of Kristallnacht but was still aware of it and was kept informed by Goebbels.

In Joseph Goebbels diaries, we can see that Hitler encouraged the protests to continue, but we are not informed if he knew about them beforehand: “I go to the Party reception in the Old Town Hall. Colossal activity. I brief the Führer about the matter. He orders: let the demonstrations go on. Withdraw the police. The Jews must for once feel the people’s fury. That is right.”.

In the last years there has been a trend to replace the term “Kristallnach” (which came from all the shattered windows of Jewish properties) with “The November Pogrom”, in order to better accentuate the magnitude of the events.