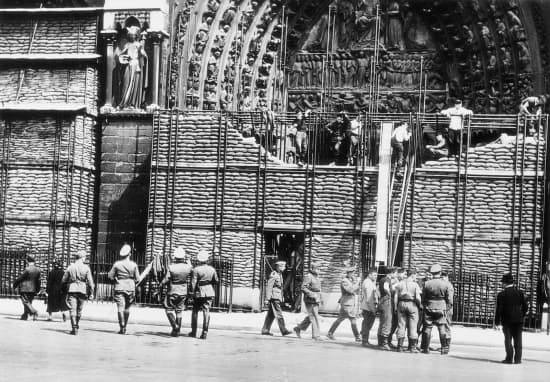 Sandbags are cleared off the facade of Notre Dame Cathedral in Paris, as Germany occupied the city unopposed on June 14th 1940.

The sandbags were used by Parisians to protect Notre Dame against bombardments.

Paris and its invaluable cultural and architectural heritage was saved twice from destruction during World War II. First time during the June 1940 German invasion, due to the passive defense and quick capitulation of French forces. Second time during the retake of the city by the Allies in August 1944, when Wehrmacht General von Choltitz, realizing the battle was lost, reportedly ignored orders from the Fuhrer to defend the city even at the cost of turning it into ruins.