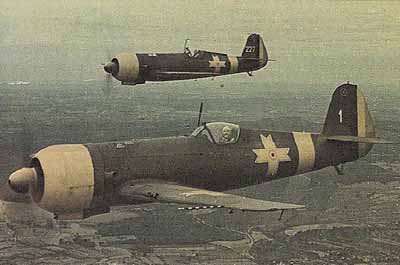 Romanian IAR-80 aircrafts are pictured as they return from the factory after undergoing repair work in 1943 or 1944.

The IAR 80, Romania’s top fighter plane, first flew in 1939, and at the time it was comparable in performance with similar aircrafts of more advanced military powers. However, due to production and ammunition issues, it only entered service in 1941.

As the war went on it became less and less effective, although it still recorded notable victories, including when the US Air Force attacked the important Ploiesti oil fields on June 10th, 1944.

There have been multiple upgrades and variants to the original IAR-80, which remained in frontline service until the end of the war.