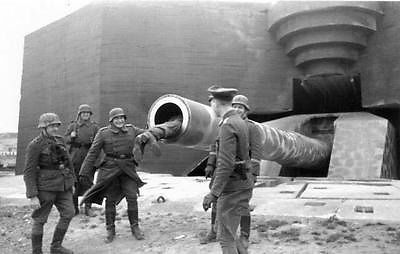 German soldiers photographed while having fun at the Naval Coastal Battery Lindemann, named after Ernst Lindemann, captain of the Bismarck battleship. Image taken at Pas-de-Calais, sometime during 1944.

Battery Lindemann (inaugurated in September 1942) was equipped with three 406mm “Adolf” cannons, housed by three casemates named Anton, Bruno and Caesar. The casemates were equipped with heating and air conditioning systems, and were large enough to contain quarters for the soldiers, munitions storage, engine rooms, filter rooms, showers, toilets and all basic facilities.

The battery was located at Sangatte, slightly west of Calais, and was part of the Atlantic Wall – a large system of fortifications built between 1942 and 1944 along the coast of Continental Europe and Scandinavia (France, Belgium, Netherlands, Germany and Norway).

Battery Lindemann was the largest in the Pas de Calais Area and had the most powerful weapons along the wall, being able to launch projectiles as far as 35 miles, with a lifespan of 250-300 shots for each cannon. For this reason, it was often targeted by Allied raids, which had little to no effect until September 1944, when two of the three battery guns were destroyed by bombings (on the 4th and 21st), while the third was put out of action by Canadian soldiers on the 26th of the month.

The battery bunkers are now partially buried, but it is still possible to visit and catch a glimpse of this massive construction, with all the history which will forever remain tattooed on its walls.