Celebrations on Strøget street after the liberation of Denmark 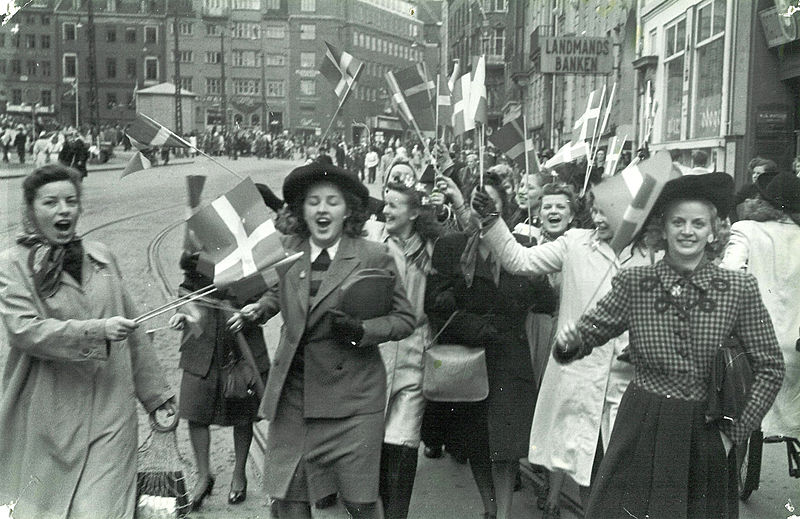 A group of women with Danish flags are celebrating the liberation from German occupation on May 5th, 1945, on Strøget street (Copenhagen).

Strøget is a famous and popular pedestrian area located in Copenhagen’s Old City. It is actually one of the longest pedestrian shopping streets in Europe (1.1 kilometers), and an important tourist attraction.

Strøget became a pedestrian zone in 1962 (in this image you can see tram lines on the street), and the success of the initiative saw Copenhagen adopt a shift in urban development, with a focus on ease of access for bicycles and pedestrians at the expense of cars – a trend which spread across Europe and is still underway in our time.

With Denmark functioning as a de facto German protectorate during World War 2, daily life was not quite as harsh for Danish people as it was for citizens of other German occupied states. However, resistance had been increasing steadily in the later years of the war, starting with August 1942, and particularly after August 1943 – when Germany dissolved the Danish government and instituted martial law. The liberation was a happy day for the people of Denmark, and celebrations continued for a long while, as only two days later Germany’s capitulation ended the War in Europe.

📖 Conquered, Not Defeated: Growing Up in Denmark During the German Occupation of World War II (Peter H. Tveskov, 2003)