Battle of Castle Itter, 1945, one of the strangest WW2 battles 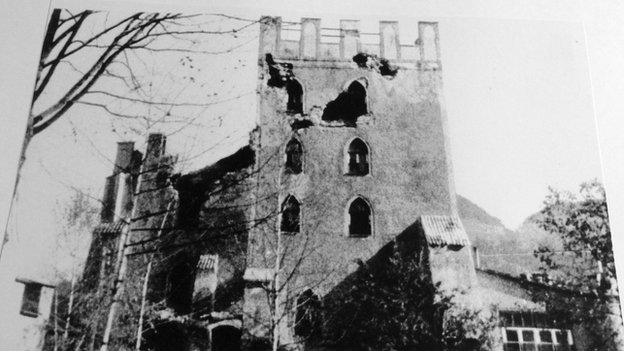 The Battle of Castle Itter is one of those “hidden gem” stories from World War Two. Quite remarkable, but not very well known. It is the only known battle from WWII in which Germans and Americans fought on the same side. In the image we can see damage to the castle following the conflict.

The Battle was carried out on May 5th 1945 in Itter, North Tyrol, Austria, and involved Wehrmacht soldiers, US troops of the 23rd Tank Battalion of the 12th Armored Division, and French prisoners of War defending Castle Itter from attacks by the German 17th SS Panzergrenadier Division.

On May 3rd, A Yugoslav communist resistance member managed to leave the castle and seek help from the Americans, while a Czech cook managed to do the same the next day and reach a Wehrmacht unit led by Major Josef Gangl, which had switched sides and joined forces with the Austrian resistance.

Meanwhile, SS guards fled the castle sensing that something is wrong, and French prisoners had taken control, awaiting relief.

Major Gangl’s unit teamed up with forces of the 23rd Tank Battalion of the 12th US Armored Division, led by Captain John C. “Jack” Lee, and proceeded to mount a rescue mission. As the American and German forces reached Castle Itter, they prepared to fend off an attack by the 17th SS Panzergrenadier Division, which aimed to retake control of the prison. The liberating forces managed to hold the castle (barely) until relief came from the 142nd Infantry Regiment of the 36th Division of XXI Corps, which swiftly defeated the aggressors. Two days later, Germany surrendered unconditionally.

Major Josef Gangl was killed in the Battle while trying to protect former French Prime Minister Paul Reynaud. He was honored as an Austrian National Hero and had a street named after him.

📖 The Last Battle: When U.S. and German Soldiers Joined Forces in the Waning Hours of World War II in Europe (Stephen Harding, 2013)